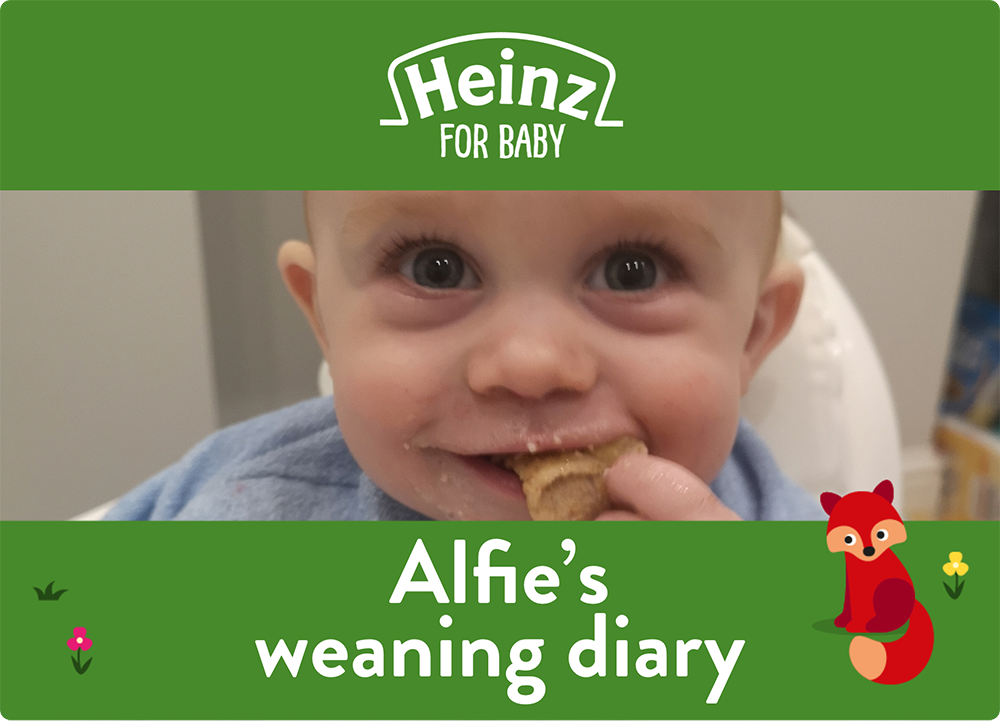 Alfie’s parents Lucy and Anthony started Alfie’s weaning diary at 10 months. He’s happy eating a variety of foods and flavours but is he eating enough?

"Alfie loves his food, putting his hands into it, playing with the textures and picking bits up. But sometimes he gets very distracted from actually eating! He has toast for breakfast and picks the pieces up himself, but he doesn't end up eating it all. He often chews it and then it all comes back out. Normally it's seeded bread but today we had white bread, so it was much soggier than usual once it was toasted. Alfie found the texture fun to play with as it was really bendy and he was laughing as he picked it up. We tried him with the Heinz First Steps Mixed Berry Muesli and he was really interested in the texture. But he kept grabbing at the spoons! He ended up with three of his own but we had plenty spare so I persevered and he liked what he had. 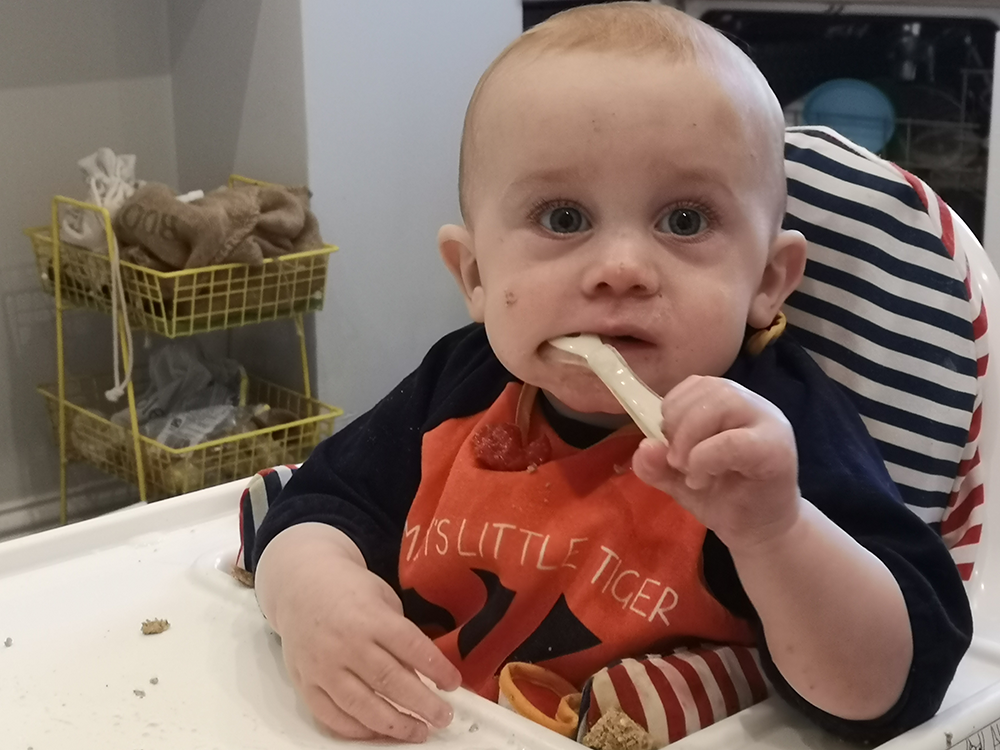 Lunch was my homemade green soup of broccoli, spinach, leeks and watercress. I spoon-fed him this and he ate a whole bowl – as much as I would eat. I put little bits of bread and cheese on his tray and he was picking them up carefully. But although he loved feeding himself, the bread just came out again.

At the weekend we had two really good days of weaning. Alfie was less distracted with his food and just generally ate a lot more. We had a pub lunch so I took some homemade green soup while we waited for our dinners. Once our food arrived I gave him little bits from my plate so he could try his first roast dinner. He liked the bits of Yorkshire pudding and he absolutely loved picking up peas one by one between his finger and thumb. He ate a fair amount – although quite a lot ended up on the floor!

We tried him with the Heinz By Nature Sunday Chicken Dinner on Sunday night and at first I was spooning it out of the jar. Alfie reached with his cucumber stick and was dipping it into the jar and then licking it to copy me. It was so cute! I gave him his own spoon and he was carefully putting it in, then managing to get it out and eat. 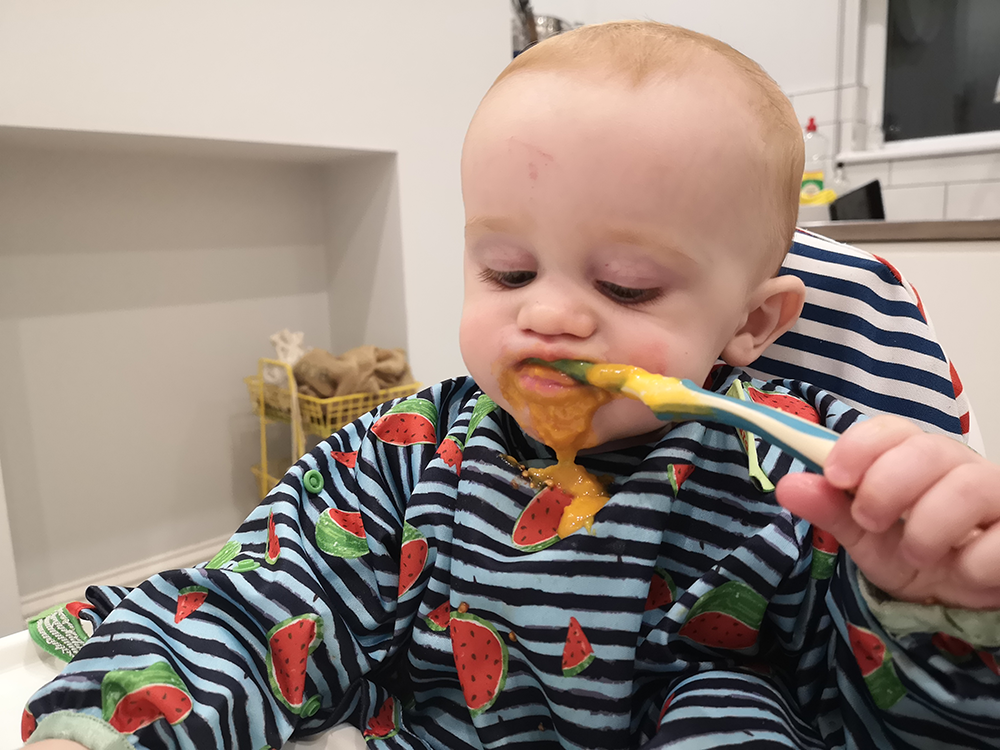 He's advanced a lot from when we first started weaning, when he was being spoon-fed. He now understands he can get the spoon in the jar himself and his aim was really good. It's also great to know exactly how much he has actually eaten when the whole jar is gone. For pudding he had Greek yoghurt and Heinz So Yummy Chocolate Biscotti. I think he likes the crunch and that they melt really quickly in his mouth. Sometimes I eat them too – they are really good.

We stayed over at my mum's during the week and she had a great idea to help him with his teething, which has been upsetting him. His top ones have been causing trouble and that means he's not always interested in much food at the moment. A couple of times in the evenings he's been really tired and just cried in his highchair and refused to eat his food, so dinners have been milk followed by bedtime.

Tonight Mum gave him a homemade yogurt ice-lolly, and it was a completely new texture and temperature. He's never had anything frozen before! He made some screwed up faces because it's the first time he's ever had anything so cold and it surprised him, but he held the stick himself and ate the whole thing really easily. I think it was so good for his teething. 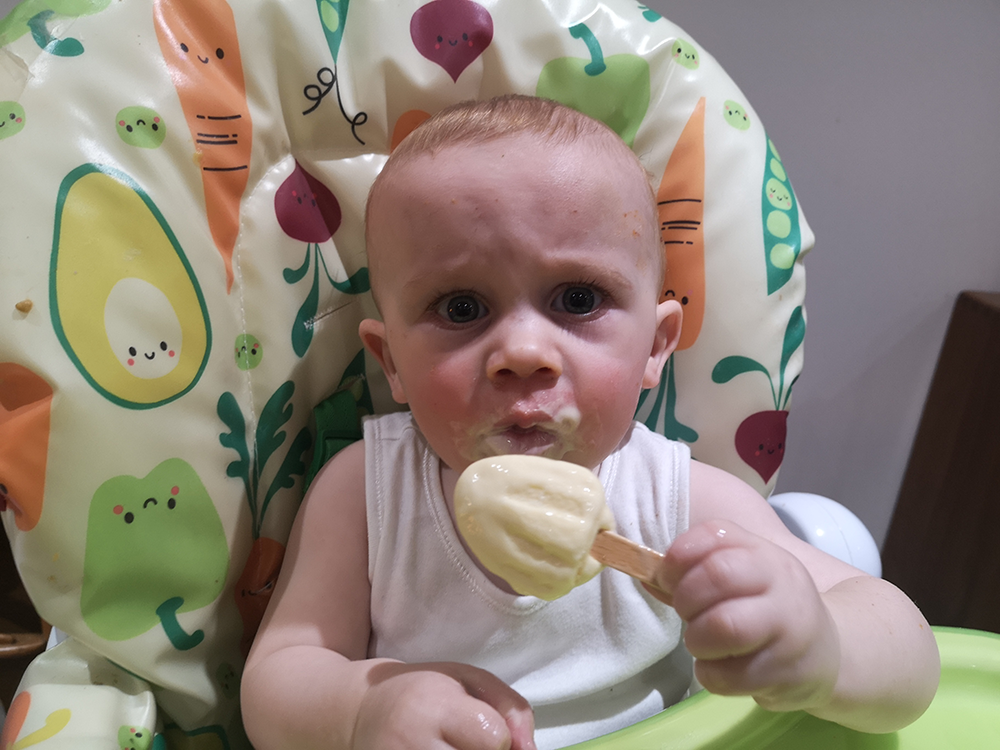 The next morning he was a bit fussy, maybe because his cousins were at the table and he was too busy watching them and enjoying himself without eating anything. But once they got down from the table he ate much better. He definitely gets easily distracted so we need to work on keeping him focused.

For lunch he had my mum's homemade fish pie with salmon, white fish and prawns. He has never had prawns before so I gave him a whole one to see what he would do. He put it all in his mouth and sucked it! Then when he'd spat it out because it was so big, I cut it into small pieces and he ate those. It's been a really interesting couple of days with lots of new and exciting tastes and textures.

Sometimes I think we need to make mealtimes quite short to keep him a bit more focused because he likes to look at what's going on around him, picking his mat up and playing with his bib. But we don't want mealtimes to be a chore and we like to let him play. It's about him exploring, trying new foods, and feeling them for himself."