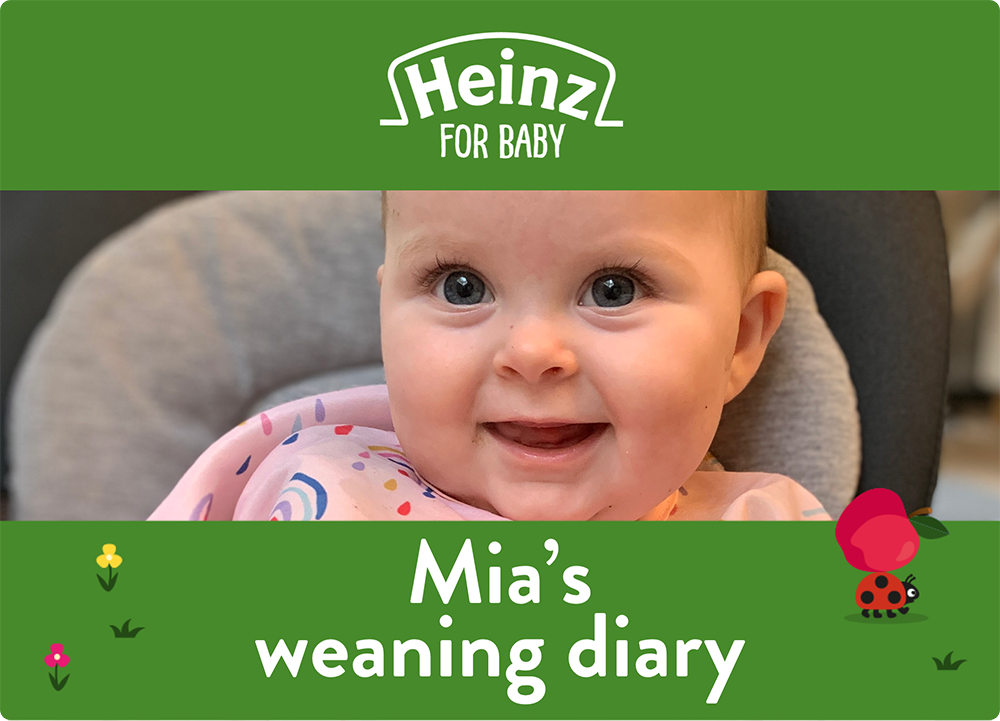 We follow Beth and Ollie’s baby Mia from her very first mouthful of solid food at 6 months. Will she turn out to be a fussy eater like her mum?

"I’m so excited to start weaning, but a bit nervous too. I’m a self-confessed neat freak and it’s going to be messy! Ollie can’t wait to have a go because he’s not had much to do with feeding until now. We’ve got everything ready…all the gear, but no idea! 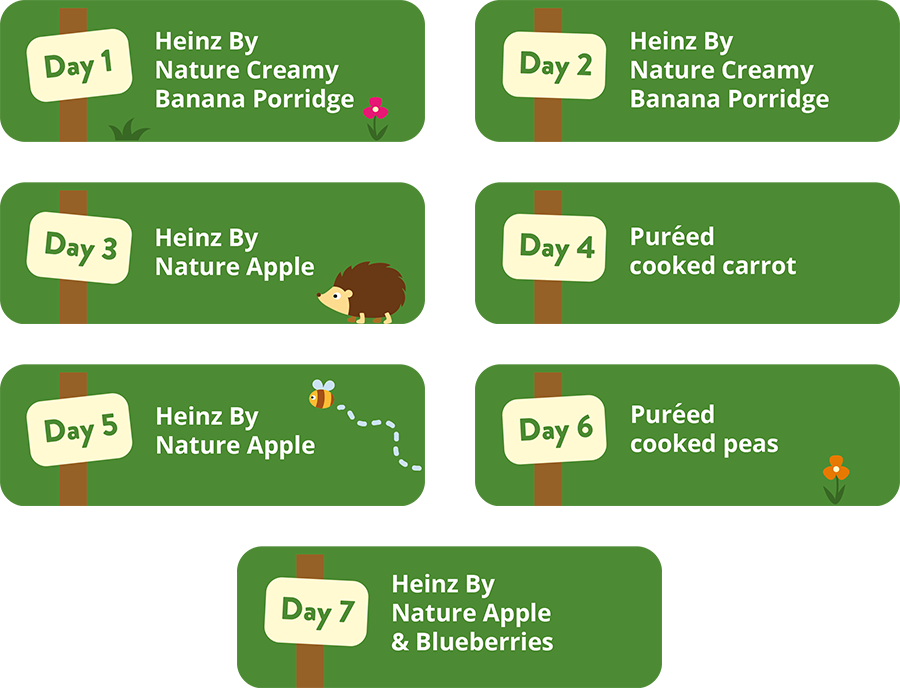 The first day felt like a huge step because she turned six months old and the weaning can start. She had Heinz First Steps Creamy Banana Porridge because we felt that was a good one to start with because it wasn't too complicated and didn't have too many flavours. I tried Mia’s porridge myself about three times to check it was the right temperature and texture, but I’m sure I’ll eventually relax. I offered her the first spoonful and it was so exciting - she leaned forward with her mouth open and happily had her first mouthful. She was smacking her lips together and made a little 'mmm' noise, so I gave her another two spoonfuls and she opened wide to eat it. Then she reached out and grabbed the spoon, she was smiling and it was so lovely. 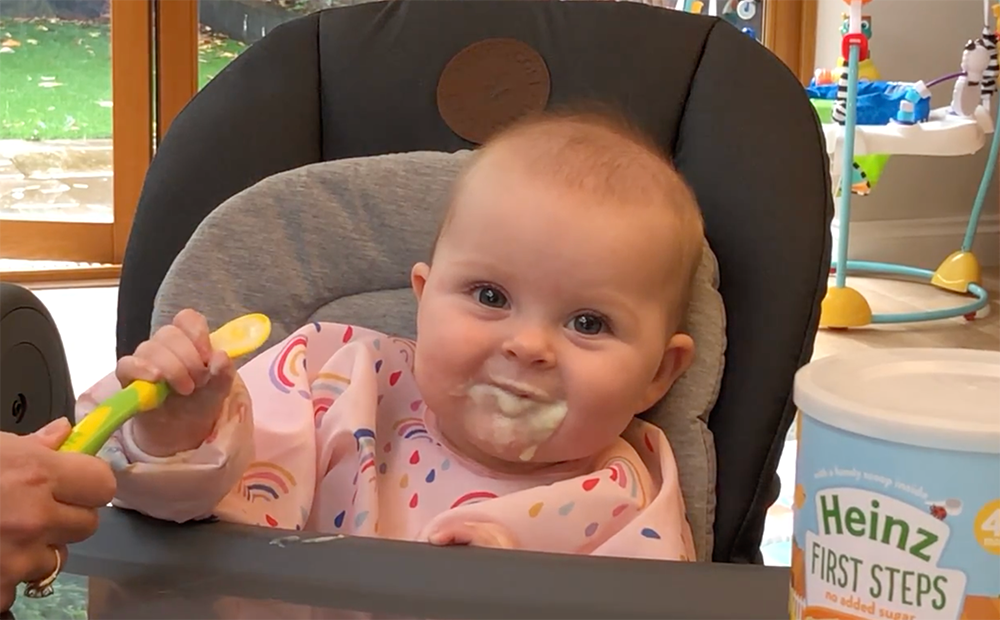 Each time I would offer her a spoonful and she would reach to grab the spoon and it felt like she was guiding it to her mouth and putting it in. I think she liked gnawing on the rubbery tip of it too, although it made it trickier for me to control the spoon! It was a very exciting experience in that there were just so many new things around her. As a first day we both felt quite positive about it. Obviously as people say, it's baby steps, but it really is about Mia just having a few spoonfuls here and there and getting used to all these new flavours that she's never experienced before. She was using her hands to spread it around on the highchair tray and she didn't seem to mind porridge being all over her face. It’s definitely going to be a messy affair.

For day two we went with the porridge again, but on day three we introduced Heinz By Nature Apple at breakfast. I was nervous trying a new flavour and worried it would be too sour, and I think Mia seemed unsure too. She had three spoonfuls and was smacking her lips together, and then she scrunched up her face as though the tang of the apple had hit her tastebuds. Her eyes were full of surprise. She was quite vocal about the whole eating experience and definitely let us know that at times she wasn't happy. I am guessing every day is going to be different.

We were thinking, do we keep going or should we stop if she's not happy? I feel I’m trying to balance her having enough with reminding myself that she has only just started her food journey so we must remain relaxed – even if she has just a few spoonfuls. It’s easy as adults to feel that an empty plate is a successful meal whereas for a baby a few tasters on a spoon are actually huge leaps in her development.

I wanted to try hard with her first vegetable on day four – pureed carrot, because my own anxieties made me think she might not like it. It was fascinating watching her move her lips in a different way responding to the texture. I have to remind myself that every mouthful is still a big step for Mia even if it only looks a little bit for us. We tried something new halfway through with a chunkier spoon that Mia could hold herself and I think it actually paid off. She can hold it better so she was not as frustrated as when I was using a smaller weaning spoon, which she was desperate to hold. Let's see how it goes. 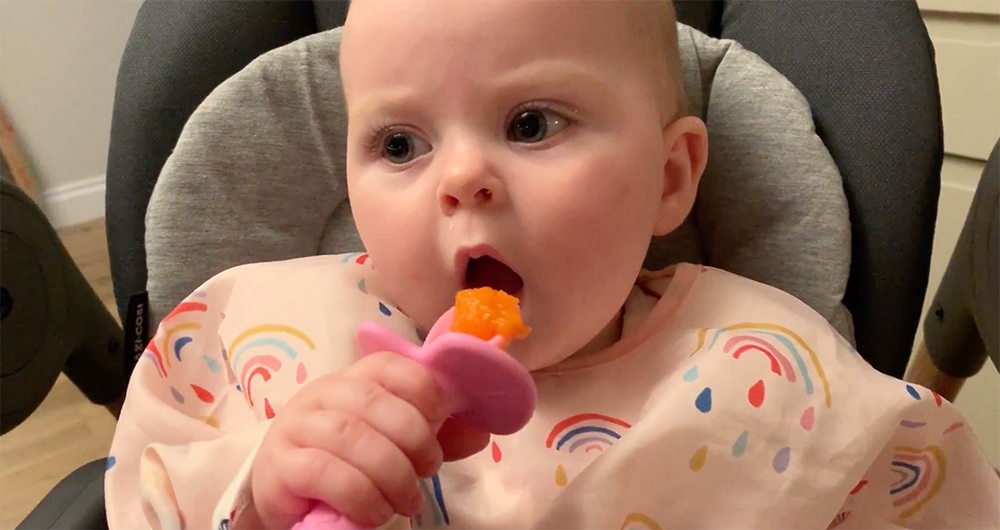 We had our first eating experience away from home on day six at Grandma’s house. I cooked peas and then pureed them and was surprised how willing Mia was to try the puree. She grabbed the spoon and leaned forward to have three or four mouthfuls in a row. I’d secretly hoped we’d have success for Grandma to see, putting terrible pressure on myself. But Mia did fantastic and there was no reason to worry. We did notice that although she had a few mouthfuls she was quickly distracted, looking around the room and reaching to play with her bib and the tablecloth. We got her attention and she had another few spoonfuls - and then looked around again. I think she liked having an audience with Grandma watching!

It’s been a great start – and we can’t believe how quickly the contents of her nappies have changed! I’m getting more aware of Mia’s eating characteristics. She’s started making little noises when she eats certain foods, making different movements with her lips and moving forwards in the highchair. I’m also noticing the signals for when she has had enough. I’m learning the importance of feeding with more speed too, as Mia quickly gets distracted. And during these early weaning days I feel it's good to have the familiar environment of home for my confidence too."