"Although I had my heart set on baby-led weaning, so far we’ve gone with traditional weaning as I can control what size pieces Savraj has. Now that he’s 7 months it's time for him to experience different textures. Savraj has to get used to the lumps and that might sometimes include gagging, which can be scary.

I tried fresh strawberries and blackberries with his Heinz First Steps Summer Fruit Porridge for breakfast and left them whole so he could experiment with the feel. He didn’t try to eat them – he wants Mummy to feed him! Normally he wants to be spoon-fed but today he started to touch the fruits which came as a surprise to me. I was quite pleased with that. I crushed them so that he could eat them and mushed them up so I felt comfortable because they were quite big pieces. This way I don't think he will have much chance of gagging with it, so it's a nice puree. I feel like breakfast is always a winner with Savraj since this is when he’s the hungriest, and he enjoys his berries. I just have to make sure I feed him fast enough. 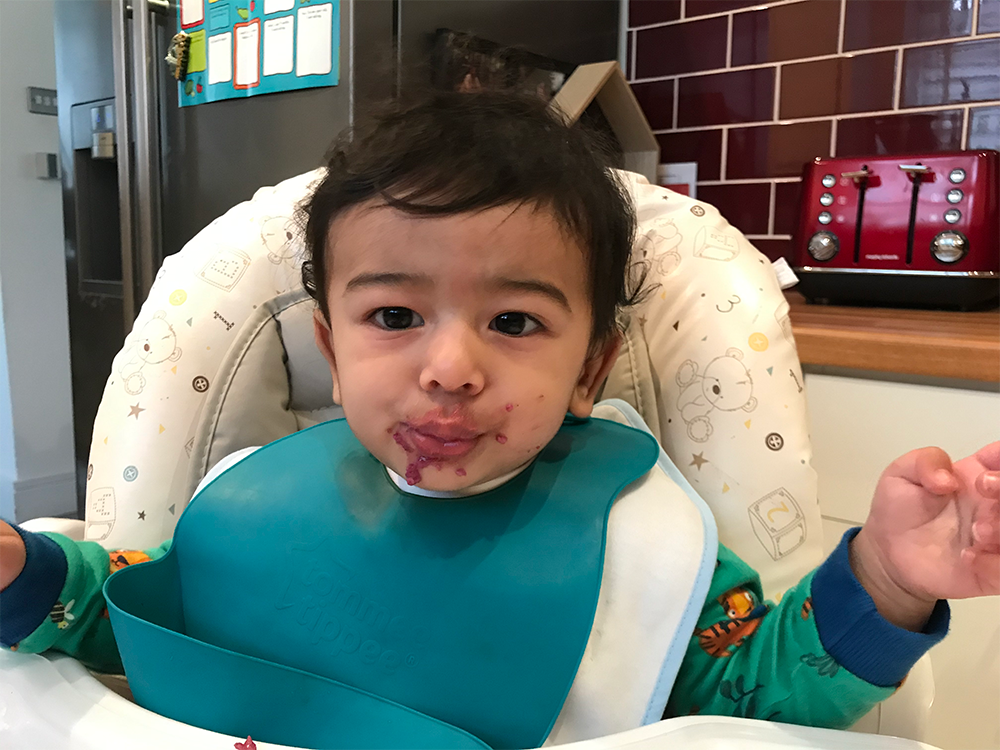 We've been trying to introduce more lumps and bumps and for lunch I made rice and shredded chicken curry. But I feel as though I was a bit naïve, thinking that he could handle that many lumps and that kind of texture. The rice was over cooked and mushed.

Saved by the blender

He got really upset mid meal because the texture was too much for him to handle and he couldn't swallow it down, so there were tears and he kept twisting his head away. I ended up pureeing it in a panic halfway through, and then he did eat it like that, even though it looked a bit gross! The portion size was also massive, so maybe it was a bit intimidating on the plate. I don’t know why I felt that brave giving him so many lumps, but you learn from it each day and I guess I won’t know what doesn’t work unless I give it a go. I’m just glad that the meal was saved by the good old blender once again.

We’re off on a spa break for two nights so I’ve had to pack meals that are convenient, yet balanced. This was the first time we fed Savraj at the service station on the way so I was nervous about getting a highchair and him focusing on lunch. When he was just having milk, it felt like you could give that to him anywhere. Now he's on solids, there’s a whole other set of complications. How do I keep the food fresh? Where will he sit? How will he react in a new environment? And what will people think of me giving him food that's difficult to eat because it has more textures?

Dinner that night was honestly one of the hardest meals we’ve ever had and it resulted in both me and Savraj in tears. We had to do an emergency meal in the hotel room, so Tarminder held him while I fed him Heinz By Nature Sweet Potato, Chicken & Veggies, because I know he loves the flavour. He was overtired and crying a lot and I was worried about him not swallowing properly or choking. We sang to him to calm him down and he eventually had the rest of the pouch. 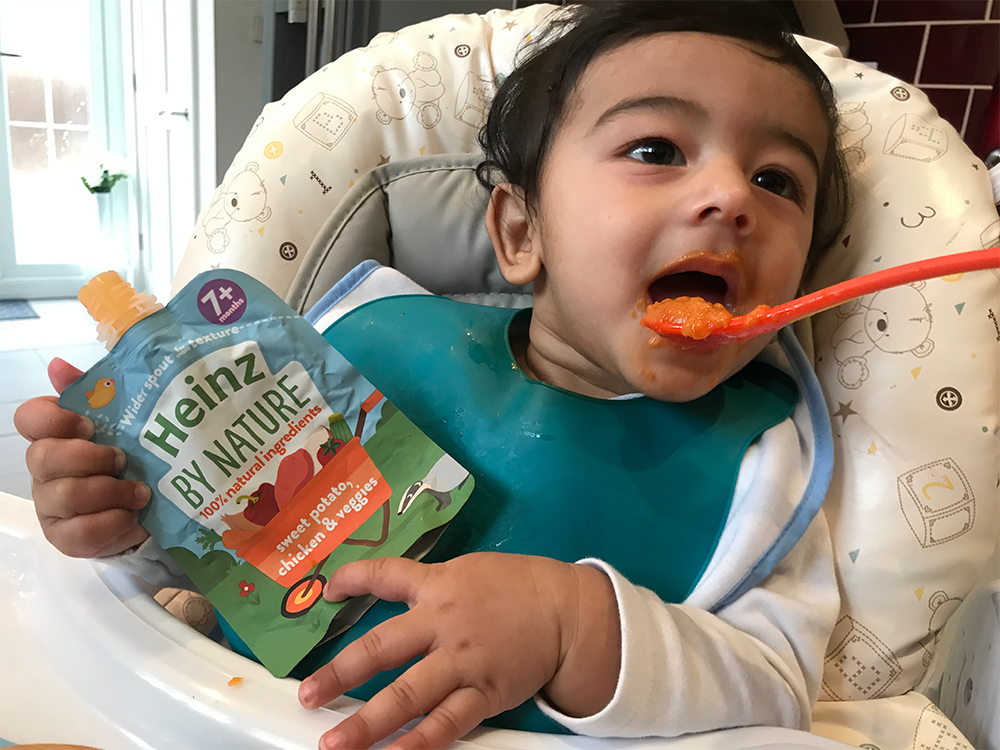 Things improved so much after that – I think because Savraj had a good night's sleep and was in a much better mood. On the way home he had Heinz By Nature Tomato Mozzarella Pasta Shapes in the motorway services and although I had to serve it cold he was fine, watching it come out of the pouch and onto the spoon and eating it all up. What I love about a pouch is that we can comfortably go out and Savraj can have his meals on the go. They are our go-to now because he’s familiar with the texture and flavour. We're especially proud of Savraj because the pasta shapes pouch has a little bit more texture and lumps, which he has got used to. Even if he isn’t paying much attention to us or his food, I feel reassured he won’t gag on it.

Combining weaning and this trip has been challenging but everyone needs a break. I feel like Savraj has developed his eating skills over the last few days being away from home. It’s so easy to be stuck in a routine that works for you as a family and not step outside your comfort zone when it comes to feeding your baby. Savraj has shown us that he’s adapted and I’ve relaxed."